This procedure reshapes the nose to bring facial features into better balance. Dr. Parker is experienced in a variety of rhinoplasty techniques in Paramus, NJ, to help men change the shape, size or symmetry of their nose.

*Refer to our Pricing page for details

Rhinoplasty
Before & After Photos 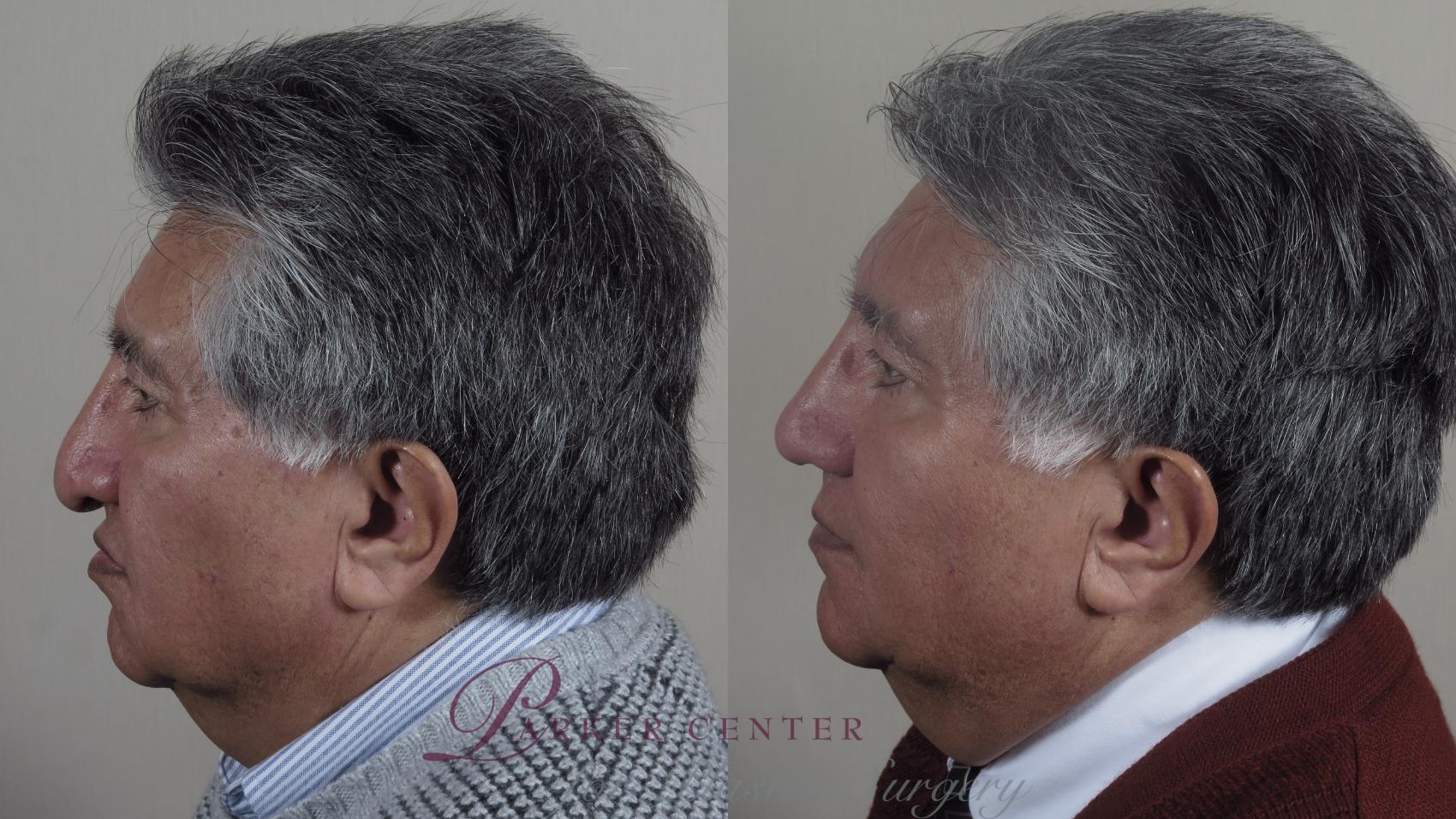 This 70 year old physician was referred to Dr Parker by a friend with concerns about the appearance of his nose. He had sustained nasal trauma years ago and had a septorhinoplasty to improve his breathing which it did. Over time, his nasal tip has drooped affecting both his appearance as well as breathing. He asked Dr Parker to elevate his dr... Read More 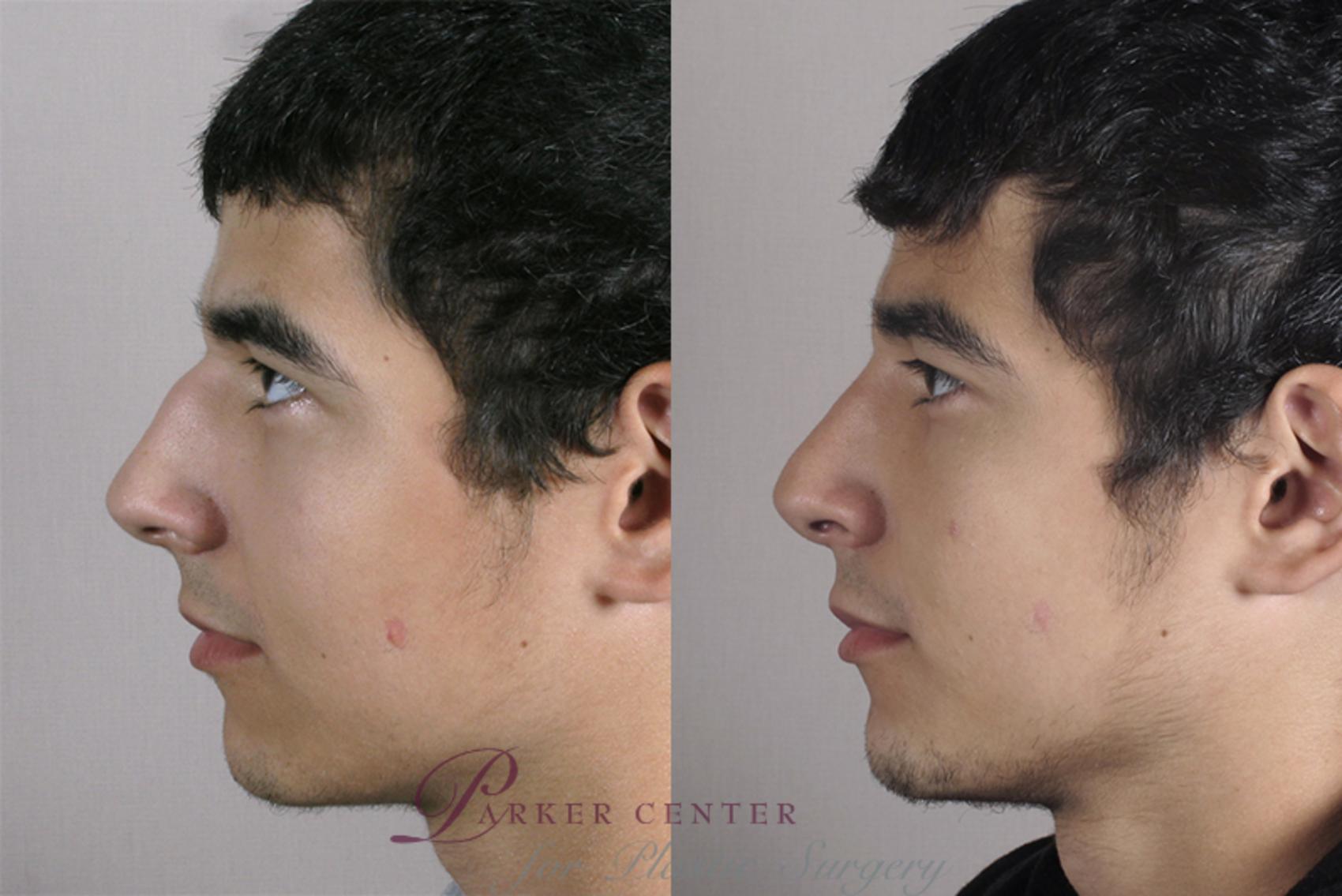 This 17 year old, referred to Dr. Parker by another patient, was bothered by the bump on his nose and his difficulty breathing. He had sustained several bouts of trauma to his nose, previously. Conservative treatment of his breathing problems by an ENT had been unsuccessful and surgery was recommended. A closed rhinoplasty was performed by Dr... Read More
Before & After
Case: 3 of 8

This 23 year old came to Dr. Parker requesting improvement in the appearance of his nose. Specifically, he was bothered by the dorsal hump as well as his nose drooping when he smiled. Dr. Parker performed a closed rhinoplasty. During this procedure, he removed the bony cartilaginous dorsal hump, performed infractures to appropriately narrow t... Read More
Before & After
Case: 4 of 8

This 30 year old, referred to Dr. Parker by another patient, asked Dr. Parker to make his nose appear smaller and straighter. Dr. Parker performed an open rhinoplasty, which included a dorsal hump reduction, infractures, sculpting of a better tip and alar base resections. The patient was extremely happy with his quick recovery and the improve... Read More
Before & After
Case: 5 of 8

This 20 year old patient requested improvement in the appearance of his nose. Specifically, he was bothered by the hump on his nose and wished to have a straighter profile. He said this developed over time without any history of trauma. He did not have any difficulty breathing. Dr. Parker performed a closed rhinoplasty which allowed him to re... Read More
Before & After
Case: 6 of 8

This 50 year old was bothered by the large size and shape of his nose as well as obstructed breathing on the left side. Dr. Parker performed an open rhinoplasty. He reduced the bony cartilaginous dorsal hump and reshaped the wide, over projecting asymmetric nasal tip with septal cartilage grafts. Additionally, he improved the patient’s obstru... Read More
Before & After
Case: 7 of 8

This 21 year old was referred to Dr Parker by another patient concerned about the appearance of his nose as well as obstructed breathing on the left side. Appearance wise, he requested Dr Parker to make his nose straighter and get rid of his "hump". In performing an open rhinoplasty, Dr Parker reduced the bony cartilaginous hump. He performed... Read More
Before & After
Case: 8 of 8

This 30 year old, referred to Dr. Parker by another patient, sustained multiple episodes of nasal trauma playing sports when he was younger. He requested correction of his prominent profile and obstructed breathing. Dr. Parker performed a closed rhinoplasty as well as an SMR and partial inferior turbinectomy. The patient was amazed by his qui... Read More

Keep in mind that each patient is unique and your results may vary.

Dr. Parker performs rhinoplasty (nose job) for men from Hackensack, Ridgewood, Mahwah, and Somerset, NJ, who want to change the shape of their nose. He may also correct breathing problems at the same time by correcting the patient’s deviated nasal septum and other related internal nasal structures.

Anatomic Differences Between a Male and Female Nose

Anatomically, the nose is a complicated structure. The skin is draped over the nasal framework, which is what gives the nose its shape and support. The upper 40% of the framework is composed of paired nasal bones that are not movable. The lower 60% of the nose consists of cartilage and is movable. Dr. Parker takes the following anatomical differences into account in performing male rhinoplasties:

Known for his surgical talent and caring personality, Dr. Parker has been serving the community for over 25 years. He has dedicated his practice to the education, safety, and comfort of his patients—making each one feel as important as family.

Closed rhinoplasty, which involves incisions hidden on the inside of the nostrils, is indicated for relatively minor shape adjustments to the nasal bone and cartilage.

Before & After: Closed Rhinoplasty*

Open rhinoplasty involves a small and inconspicuous incision underneath the tip of the nose and between the nostrils. This is connected to incisions inside the nostrils. These cleverly hidden incisions allow Dr. Parker to “open” the nose and sculpt the underlying bone and cartilage very precisely under direct vision.

Before & After: Open Rhinoplasty*

A tip plasty involves improving only the tip of the patient’s nose. Almost always, Dr. Parker will use an “open” approach to achieve the most natural-looking, symmetric tip he can.

During your consultation in the office or online, Dr. Parker will listen carefully to your concerns about the appearance of your nose. He will then explain to you his recommended surgical plan to improve it. His discussion with you will be supplemented by reviewing computer images of what your nose should look like after surgery.

With easy financing options and our plastic surgery cost estimates, you can pursue your aesthetic vision with peace of mind.

Rhinoplasty is most safely performed with general anesthesia. Surgical time varies from 30 minutes to 2 hours depending on the degree of complexity. Patients are discharged about an hour after surgery. There is usually little pain. Sutures and a light plastic splint used to protect the nose are removed within a week.

Most of our male rhinoplasty patients lead active lives and are anxious to return to their activities as soon as possible after surgery. With that in mind, we have tailored our surgical procedures, anesthesia, and medications, and developed our Rapid Recovery peri-operative program to accelerate patients’ recuperation after surgery. While everyone heals differently, most of our New Jersey rhinoplasty patients are able to return to work within 7 days.

Swelling and discoloration subside within 10 days and most patients can resume exercise at 2 weeks. During both your consultation with Dr. Parker and in your pre-op education visit with our Nurse Educator, your anticipated recovery will be discussed in detail.

Our surgical procedures, anesthesia, medications, and aftercare are tailored to minimize post-operative discomfort and accelerate recuperation.

Together, the nose and chin determine your profile. Chin augmentation is sometimes suggested at the time of rhinoplasty to achieve better facial balance.

Before & After: Rhinoplasty & Chin Augmentation*

Rhinoplasty procedures can be performed in combination with other procedures, such as a face lift, blepharoplasty, liposuction, otoplasty, or chin augmentation. The patient shown here had liposuction of his neck performed in addition to an open secondary rhinoplasty.

Before & After: Secondary Rhinoplasty & Neck Liposuction*

This allows the patient to have multiple areas corrected during one surgery with only one anesthesia and recovery. Usually, the recovery is similar when one or more procedures are performed.